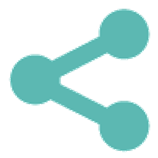 A typical transition takes a minimum of three to five months. Communication and cooperation between the organization and the OCIO are critical to making sure the organization’s assets are (re)deployed by the OCIO as soon as possible. There are many moving parts to an OCIO transition, but it helps to break it down into three phases: documentation, transfer, and implementation. 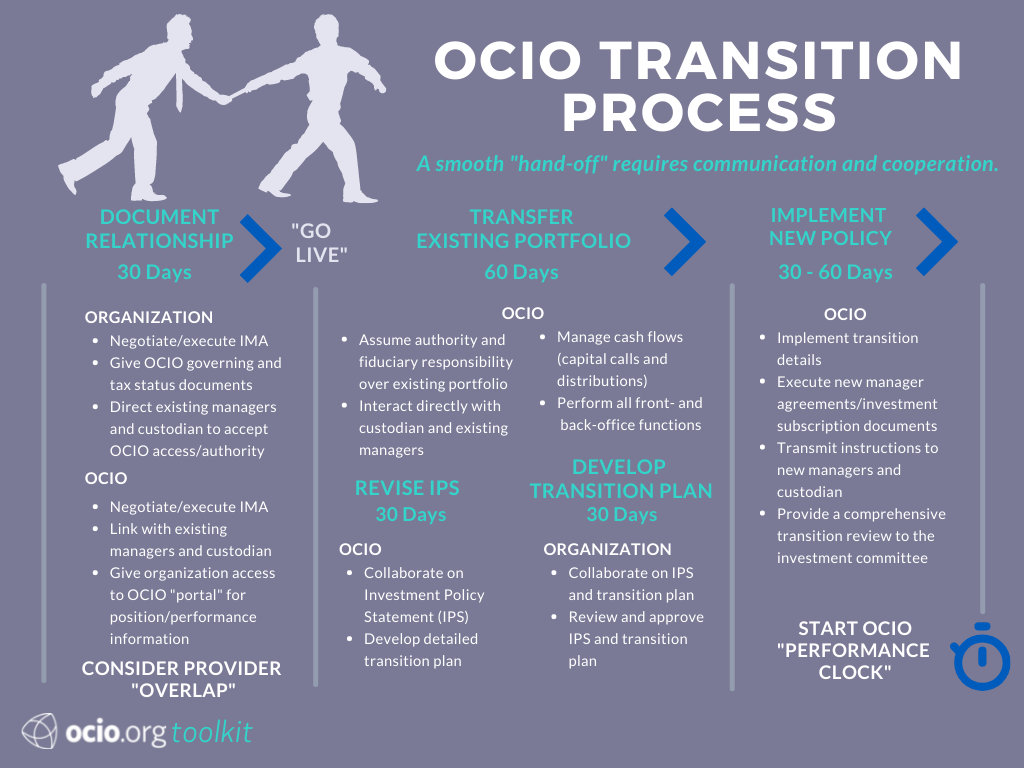 Phase One: Document the Relationship

In the documentation phase, the organization and the OCIO negotiate and execute an investment management agreement (IMA). They also complete all the authorization paperwork and systems necessary to transfer control over the organization’s existing portfolio assets to the OCIO.

Most organizations hire a law firm (typically an Investment Advisers Act of 1940 specialist) to assist in the drafting and negotiation of the legal terms of the IMA. Some search consultants also offer assistance with the non-legal terms (e.g., appropriate benchmarks for performance measurement).  Make sure the IMA nails down all the key business terms discussed during the selection process, with particular attention to the implementation system(s), the level of discretion granted to the OCIO, any investment restrictions or requirements, and fees. If there was a particular member of the OCIO team who promised to attend the organization's meetings and that was important to the investment committee, we would suggest you add this to the IMA.  Also, watch out for any “duration traps” (i.e., penalties or restrictions imposed on the exit of the organization from any of the OCIO’s implementation vehicles – especially those that contain illiquid investments and that the organization may have to keep if it terminates the OCIO relationship).

A note on IMAs for non-OCIO outsourcing relationships:

If “open architecture” manager selection is important to your organization, but you have chosen an outsourcing provider that generates additional revenue through the use of proprietary products or revenue-sharing arrangements with managers  (as opposed to a true OCIO that is paid solely based on assets under management and performance), you may wish to consider limiting the use of those products and/or arrangements in the IMA. Placing a cap on the percentage of the organization’s assets that may be susceptible to conflicts of interest will help reduce the conflict-monitoring burden on the investment committee and encourage your outsourcing provider to consider a wider range of managers/service providers.

Consider one month of overlap with the organization’s prior provider:

If the organization is switching from another OCIO or outsourcing provider, an overlap can help reduce the chances that the organization’s assets will be sitting in cash while the new OCIO is working to get the transfer documentation and communication systems ready to “go live.”  While this represents a bit of extra expense, some organizations report that maintaining market exposure (versus liquidating funds and having cash) during the documentation phase saved them hundreds of thousands of dollars.

The investment committee and OCIO also begin work on the Investment Policy Statement (IPS). The elements of a typical IPS can be broken down into three categories.

Governance – The IPS should define the assets covered by the policy, clarify the roles and responsibilities of the key stakeholders (the organization’s governing board, the investment committee, the OCIO, and other essential service providers), and create a schedule for the regular review of the IPS terms. In some cases, the IPS also will delineate the fiduciary standards that apply to the management of the investment portfolio (e.g., the relevant state’s version of the Uniform Prudent Management of Institutional Funds Act (UPMIFA)).

Risk/Return Objectives – This section of the IPS includes:

Risk Management – Finally, the IPS should establish investment performance reporting requirements, criteria for the review of the portfolio’s risk profile, and the parameters for periodically rebalancing the portfolio to its target allocations.

(For a more detailed discussion of IPS considerations, click here.)

Why is the OCIO involved with the IPS?

Although the IPS, as a document, technically “belongs” to the organization (as opposed to the OCIO), it is reasonable and expected that the new OCIO will help suggest changes and improvements based on the OCIO’s experience and expertise. As we have previously noted, before hiring an OCIO, many investment committees will have spent the bulk of their time hiring, firing, and reviewing individual managers. And few will have had access to the analytical tools required to model the expected investment outcomes of different risk and asset allocation parameters. As a result, the organization’s existing objectives may be based more on intuition, than financial data and rigorous, quantitative analysis. An OCIO will have tools to help the investment committee better understand the level of risk in the organization’s portfolio and how that might change under a range of different investment scenarios. Working together, the investment committee and its OCIO can achieve a more quantitatively integrated view of the investment portfolio and determine the risk/return balance that will best support the organization’s core mission.

How does an OCIO relationship affect the responsibilities of the organization’s board and investment committee?

As noted above, an important function of the IPS is to clarify the roles and responsibilities of the organization’s internal and external stakeholders. An organization that is new to an OCIO relationship will have to make significant changes to its existing “seating chart.” Without clear guidance, it is likely that the various parties will make incorrect and, possibly, conflicting assumptions about what they are permitted/supposed to be doing.

Because organizations have different structures and objectives, there naturally will be some variation in roles and responsibilities following the hiring of an OCIO. As a general rule, the interaction of the governing board and the investment committee will remain largely the same. The governing board will retain its high-level control over and oversight responsibilities with respect to the investment committee, for example:

Typical division of responsibilities between an investment committee and OCIO. 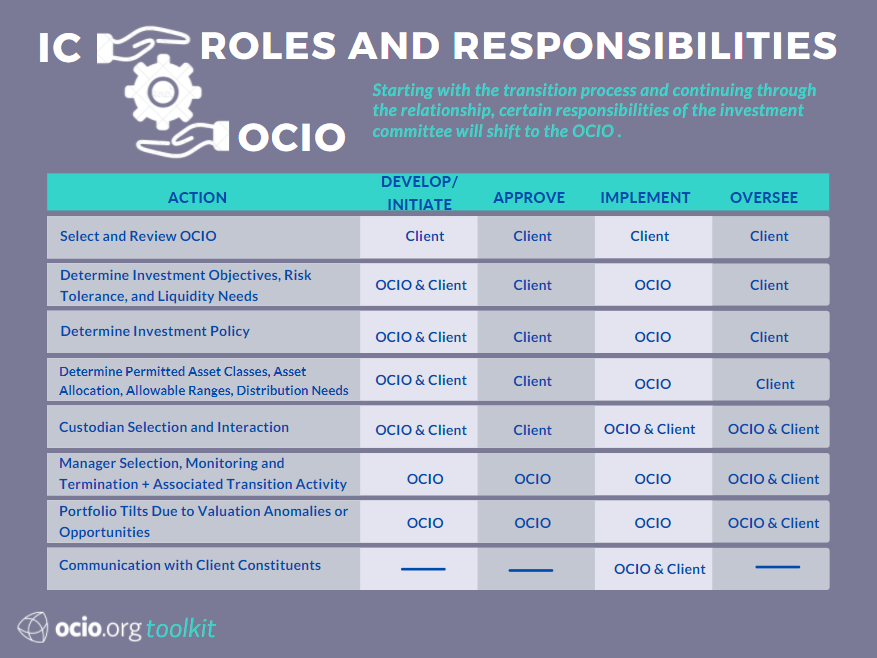 After the organization approves the new IPS, the OCIO evaluates incumbent managers against the new policy and develops a detailed transition plan with input from the organization. It is worth noting here that some OCIOs carefully review the organization’s existing managers to see whether any can be incorporated into the OCIO’s new recommended lineup (potentially reducing transaction costs), whereas others simply terminate all of the organization’s existing, liquid managers and start over. If you have managers you wish to keep or have strong feelings about the way in which the OCIO handles the existing portfolio, we recommend that you communicate those preferences as early as possible in this phase of the transition. Also, if the IPS imposes any restrictions or specifies particular considerations for the portfolio’s investments (e.g., “values-based investing” considerations such as ESG, impact, sustainability, and DEI) – the OCIO and the investment committee should discuss and decide how best to implement them.

In the implementation phase, the OCIO executes the transition plan by coordinating manager transitions and executing new sub-manager agreements and subscription documents. Phase three is complete when substantially all assets (excluding illiquid legacy investments) are deployed according to the transition plan. At this point, the OCIO provides a comprehensive transition review to the investment committee, and the clock starts on the OCIO’s accountability for performance.

Go to "Brush Up Governance"

Standards for Excellence: How to Fulfill Your Fiduciary Responsibility around Oversight of Your Investment Program

There are many moving parts to an OCIO transition. It helps to break it down into three phases: documentation, transfer, and implementation.

This toolkit illustrates the typical division of responsibilities between an Investment Committee and its OCIO.